Taking a Look at Skateboarding History 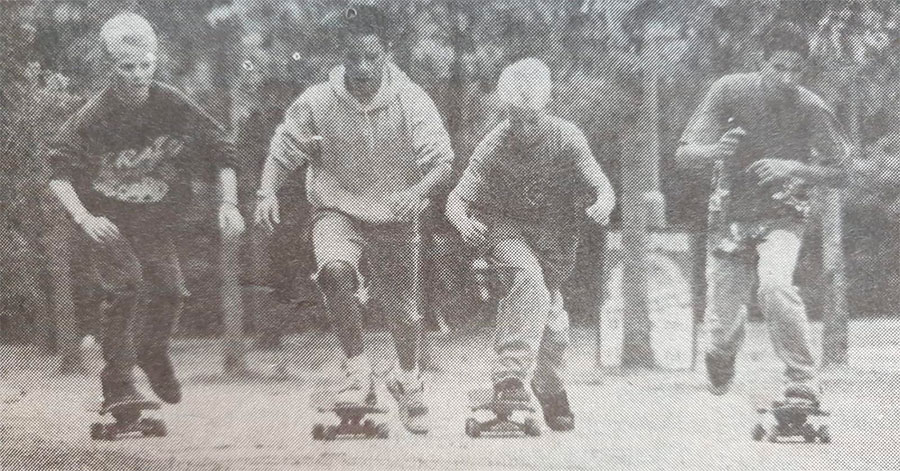 Whether you're a beginner or a seasoned pro, there is no denying that skateboarding is one of the most popular activities around. And it's not surprising that the sport has a rich history. In this article, we'll take a look at the origins and evolution of skateboarding. We'll cover the history of competitions, the evolution of urethane wheels, and the origins of street skating.

Despite the fact that skateboarding has been around for many years, there is no clear answer to who invented the sport. There are many popular theories, but no definitive inventor. In the 1960s, skateboarding was in its infancy.

The earliest skateboards were small wooden boards with metal wheels. These were narrow and short, like a surfboard. They were used to ride down sidewalks.

The first patented skateboard was designed by Larry Stevenson. He invented the double kicktail. He also organized the first skateboarding contest. The first official skateboard was manufactured by the Roller Derby company in 1959.

In the mid 1970s, urethane wheels were introduced. These were much faster and allowed for more technical tricks. This helped revive the sport. It is also rumored that Hawaii had a large influence on the sport in the earlier phases. In fact, Hawaii has become a popular place for skaters to practice.

Throughout skateboarding history, the urethane wheel has played an integral role in its development. This invention, which came in the early 1970s, changed the way skateboards were manufactured. They provided riders with a smooth ride and stability.

The wheels are made of polyurethane, which is a synthetic rubber. These wheels are now used in a variety of applications. They are available in various hardness levels. In addition, they are very energy-consuming. They produce significant greenhouse gases. The recycling process of these wheels is extremely polluting.

In the early 1970s, urethane wheels were still experimental. They were not yet used in roller skating. However, they were used by skateboarders as an alternative to the metal wheels that were traditionally used. They were designed to be more durable, providing a smoother ride and stability.

The first commercial urethane wheel for skateboards was developed by Frank Nasworthy in the early 1970s. He was inspired by a friend's suggestion to try using an experimental urethane wheel. After receiving a sample wheel from Creative Urethanes, Nasworthy assembled it on a skateboard and tested it. He was impressed with the smoothness of the ride and the stability that it provided. He thought there might be a market for urethane wheels.

Nasworthy started a company to market his wheels. He decided to call his company Cadillac Wheels. He invested $700 of his savings into the company. He sold the wheels to other manufacturers and skateboard shops. He then moved the company to California in 1972.

Nasworthy worked for Hewlett-Packard and spent his career in the design and engineering field. He helped develop the first wide-format Thermal Inkjet Printer and filed patents for paper handling. During the early days of skateboarding, many skaters got injured. Other urban sports were growing, but skateboarding was gaining traction. The popularity of the sport soared, and skate shops opened throughout the world. These shops sold skateboard videos and magazines and provided a refuge for skaters.

In the early days, skaters used wooden boards with roller skate wheels. These were thin, primitive and hard to maneuver. They also had to deal with obstacles and objects.

A skateboard trick that is often thought to be the most important is the ollie. The ollie is a maneuver in which a skateboarder jumps over an obstacle, typically a flat bar or a launch ramp.

The ollie was invented by Alan Gelfand in 1978. It became the foundation for some of the more complicated flip tricks.

The first televised skateboarding competition was X-Games in the early 1980s. It was a breakthrough for the sport and introduced it to a wider audience. However, X-Games has been eclipsed in recent years by the Summer Olympic Games.

In the mid 1980s, skaters started to incorporate public spaces into their riding. They used skate parks and public spaces, but also began using obstacles in parks and street areas.

One of the first skateboard companies, Makaha, was founded. The skateboards became more stable and easier to manipulate. The decks became wider, longer and were built with kicktails at each end. The ollie also spawned new tricks, and skate hardware improved significantly. The first skateboarding competition was held in Hermosa Beach, California in 1963. The skateboards used in the contest were thin boards with primitive wheels. Eventually, more skateboard companies came into the market and organized competitions.

In the late 1960s, manufacturers were too busy making boards to conduct research and development. Safety concerns led to a second decline in the popularity of skateboarding.

During the 1980s, skateboard manufacturers began to see the rise of skateboarding as a sport. The 1980s also saw the emergence of vertical champions.

In the 1990s, skateboarding entered the mainstream culture. It was portrayed in the movie "Lords of DogTown," and it became popular among younger generations. It was also included in the 2020 Olympic Games.

In addition, the skateboarding community was bolstered by skate-related events organized by Titus Dittman. In Germany, skateboard manufacturers were importing skateboards and skate-related products from the United States.

A popular skateboarding video show, "The Bones Brigade," helped spark skateboarding's popularity in the late 1980s and early 1990s. The show was a hit with young skaters throughout the country.

The first skateboarding magazine was published in 1964. The skateboarding community expanded as public skateparks were established throughout the country.

In 1975, Tony Alva's skateboarding team, the Zephyrs, showed that skateboarding could be a competitive sport. Stacy Peralta was a part of the Zephyr team. The team won the Bahne/Cadillac National Championships in Del Mar, California. The team also introduced "surfer style" skating to the world. Authenticity is a key value for skaters. This subculture is based on mutual respect and support. It encourages self improvement and curiosity.

Authenticity is the key to skateboarding's success. It has been a challenge for USA Skateboarding to ensure that skateboarding's culture and values are maintained. The governing body may not realize skateboarding's appeal from the perspective of a child who grew up with the activity.

While there are no hard and fast rules, skaters have their own set of rules and standards. They compete to invent a new trick, compete to get the best grind, and generally strive to make their skating a more enjoyable experience.